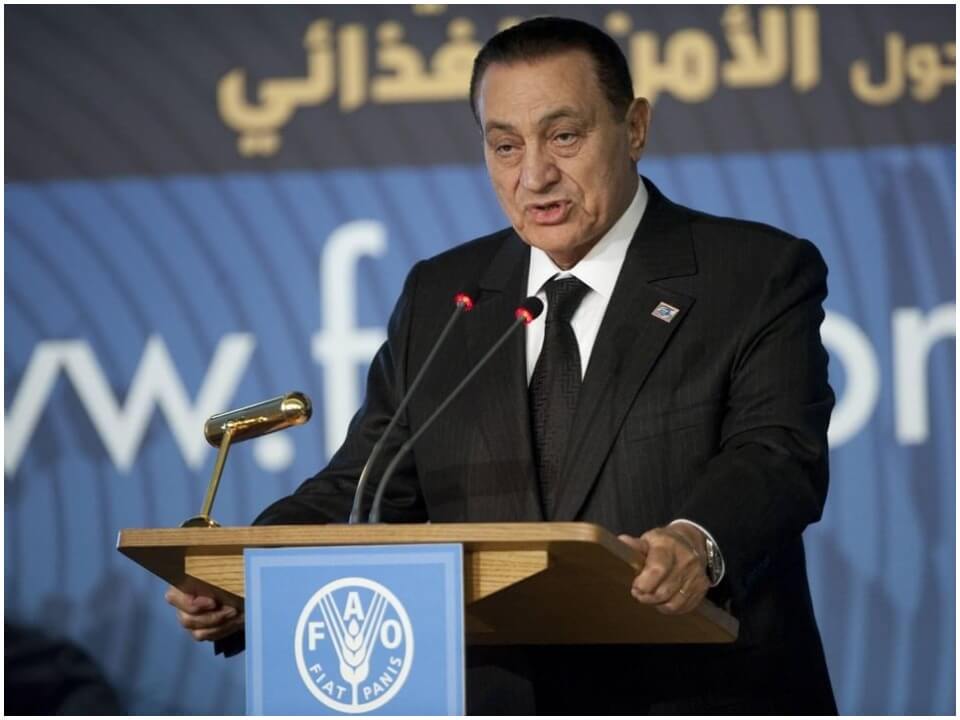 Former Egyptian president who was infamous as a dictator during his tenure died at the age of 91. Hosni Mubarak was born on 4th May 1928 in a locality of the Nile delta at Kafr-el-Meselha and joined the Egyptian Armed Forces after his schooling and graduated from the Cairo Military Academy on 2nd February, 1949.He then joined the Air Force Academy in Bilbeis and became an Air Force officer on 13th March, 1950. In the 1950s, he was a pilot in Spitfire squadrons for two years and an instructor at the Air Force Academy.

From February 1959 to June 1961, he participated in the Frunze Military Academy and jet pilot training in the Soviet Union. In the following years he became a squadron leader and squadron leader in various units and took part in operations in the North Yemeni Civil War. After that in October 1968, he became commander of the West Cairo Airbase and on 17th November 1967 commander of the Air Force Academy.

In 1969 he was appointed chief of staff and later commander-in-chief of the Egyptian Air Force. Mubarak fought in the Yom Kippur War in 1973 and was promoted to Air Chief Marshal. In April 1975, he became Vice President and in 1979, he was sent by President Anwar as-Sadat for peace talks with Israel. Upon assassination of then president Anouar el-Sadate in 1981 being a vice-president of the Arab Republic of Egypt, he succeeds him after the holding of an election. He was then constantly re-elected and was frequently called a dictator and ruled almost 30 years from 1981 to 2011.

He resigned in the wake of the Arab Spring 2010/11 protests, which killed about 850 protesters in Egypt. In connection with the deadly violence against demonstrators, he was sentenced to life imprisonment in early June 2012. Imprisoned and condemned by the Egyptian justice after his departure from power, he was released in 2017. His death is announced by Egyptian public television on February 25, 2020 in Cairo. However as of now there are no reports or information revealed about exact cause of death however he was in the intensive care unit in a hospital, according to his son Alaa Mubarak.

According to media reports when he resigned his net worth was estimated to be $40 to $70 billion which he made mostly from the military contracts and corruption. However as of now there are no details available about exact figures of his net worth at the time of his death.