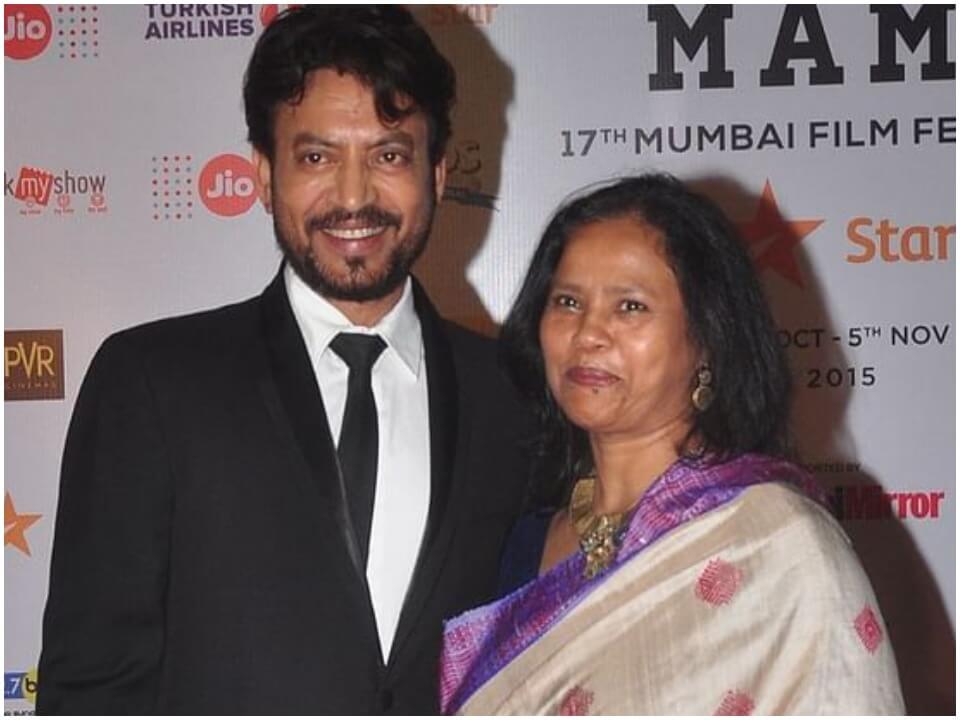 Sutapa Sikdar wife of late Irrfan Khan is a Bollywood producer and screenplay writer who was born on 18th September, 1967 in New Delhi to Assamese family. She spent most of her childhood in raising up in New Delhi and did her schooling from Kendriya Vidyalaya, Andwers Ganj. She was passionate about making her career in film industry thus quickly enrolled at National School of Drama. It was the time when she met her husband Irrfan Khan and both fell in love with other while studying. Although they made it clear and decide to not marry until they find employment in the industry.

Talking about her career then she started to write screenplay for his husband in 1993 for the television show “Banegi Apni Baat”. Irrfan didn’t want to ruin the show thus he revised that script about 11 times and after then finalised the screenplay and story. Later she contributed her screenplay in “Khamoshi: The Musical, “Supari”, “Shabd” and “Kahani”. It was 2015 when she even made debut as producer with film “Madari” starring his husband Irrfan Khan and got immense response from viewers and critics.

She married to his love Irrfan Khan in 1995 only after getting recognition in the industry. Irrfan was one of the finest actors ever in the Bollywood of his generation and today, he died after long battling with neuroendocrine tumour. He was the face of India in abroad and worked in several Hollywood productions such as The Life of Pi, Slumdog Millionaire, The Mighty Heart, Inferno and Jurassic World.

In Bollywood, his most famous films include his debut, the Academy Award nominated Salaam Bombay!, Maqbool (2004), Paan Singh Tomar (2011), The Lunchbox (2013), Haider (2014), Gunday (2014), Piku (2015), Talvar (2015), Hindi Medium (2017) and Angreji Medium(2020). His most recent appearance came in Angreji Medium and as usual he just won the hearts of audience with his unique style and acting. Irrfan couldn’t attent promotion events but he still encouraged people through audio notes. He said.

“One doesn’t have any other choice but to remain positive. Whether you are able to make lemonade in such situations is entirely up to you. We’ve made this film with the same sort of positivity. I hope this film is able to make you laugh and cry in equal measure.”

Irrfan Khan was diagnosed with a very rare cancer called neuroendocrine tumour in March 2018. He went to United Kingdom and was admitted at Kokilaben Dhirubhai Ambani Hospital on 28th April, 2020 after his heath worsened further. He was underwent treatment for colon infection and died on 29th April, 2020 and his death was confirmed by his family in a statement which reads,

“I trust, i have surrendered”; These were the some of the many words that Irrfan expressed in a heart felt note he wrote in 2018 opening up about his fight with cancer. And a man of few words and an actor of silent expressions with his deep eyes and his memorable actions on screen. It’s saddening that this day, we have to bring forward the news of him passing away. Irrfan was a strong soul, someone who fought till the very end and always inspired everyone who came close to him.

After having been struck by lightning in 2018 with the news of a rare cancer, he took life soon after as it came and he fought the many battles that came with it. Surrounded by his love, his family for whom he most cared about, he left for heaven abode, leaving behind truly a legacy of his own. We all pray and hope that he is at peace. And to resonate and part with his words he had said, “As if I was tasting life for the first time, the magical side of it”.

His friend and director of movie Piku Shoojit Sircar one of the firsts who paid tribute to his late friend. He wrote,

“My dear friend Irfaan. You fought and fought and fought. I will always be proud of you.. we shall meet again.. condolences to Sutapa and Babil.. you too fought, Sutapa you gave everything possible in this fight. Peace and Om shanti. Irfaan Khan salute,”

Sutapa has worked in several superhit movies and even worked as a producer of couple of movies. Although her exact net worth and fortune can’t be discovered whereas his husband Irrfan Khan net worth is more than $50 million.