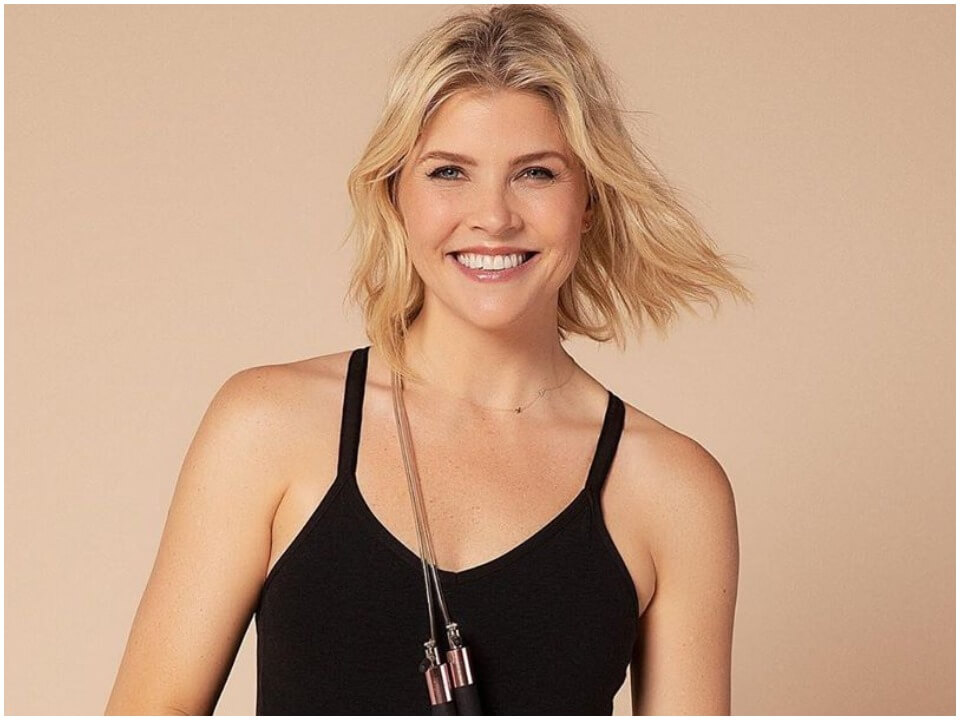 Amanda Kloots is the wife and partner in everything that matters to Nick Cordero, a Broadway star. She was born on 19th March, 1982 in Canton, Ohio, USA and currently working as a fitness trainer who recently used to dance on several Broadway productions. Just at the age of 10 years, she enrolled for professional coaching of ballet dancing and studies performing arts and even participated in various school plays.

Apart from this, she even experienced the acting on Broadway as well and she is very much passionate about everything which she does. Amanda does everything requires in order to stay in shape and fit and the most convenient way is jump rope. In her classes she provides mix training of cross and dance with special attention in order to create unique workout by which their followers will have sweat just within few minutes.

Amanda is married to Nick Cordero whom she met while working on the set of “Bullets Over Broadway”. After that, they started dating and fell in love with each other and bound in strong bond in a relation which started from a drink lounge “Skylark”. She and Broadway star tied the knot in October 2017 in a very low profile but mesmerizing wedding ceremony. It took place in New York City where only 75 peoples attended who were believed to be only their family and close relatives. From their wedding they have a boy named Elvis Eduardo Cordero who was born in June 2019.

Amanda shared a sad news by which thousands of her and Nick’s fan didn’t expected. Earlier in April 2020, she posted that Nick is a victim of coronavirus who was getting treatment at hospital. But, according to her belief, he might be misdiagnosed due to which his health deteriorated further and he became unconscious. After this post she gained lots of sympathy from around the world and prayed for quick recovery. She posted,

“My whole world has stopped. Please pray for my husband. Prayer warriors, prayer circles, whatever you’ve got. Energy, meditation, positive thinking. He is fighting for his life right now. Elvis and I need you Nick Cordero. It’s time to fight daddy.”

Recently on 18th April, 2020 she posted horrible news that right lag of Nick must be amputated due to complications of coronavirus. Amanda said,

“We got some difficult news yesterday. Basically we’ve had issues in his right leg with clotting and getting blood down to his toes and it just isn’t happening with surgery and everything. So they had him on blood thinners for the clotting. Unfortunately, the blood thinners were causing some other issues — blood pressure and some internal bleeding in his intestines. So we took him off the blood thinners. But that again was going to cause some clotting in the right leg, so the right leg will be amputated today.”

Huge relief for Nick’s fan as Amanda just informed about his current health status and also said that “we WILL Dance Again”. Nick Corbero is recovering really well after his right leg amputated and while sharing this update she was about to cry. Amanda said,

“I just heard from the doctor and he’s doing good, guys. For Nick he’s doing the best that he possibly can right now, which is a huge hallelujah. Surgery went well. He’s recovering well after surgery. The wound looks okay. He didn’t lose a lot of blood. His blood pressure is okay. His heart is okay.”

“His even, his internal bleeding has kind of calmed down. So everything seems to be kind of like calmed down, which is so great ’cause this has been such a roller coaster. My brother said the other day he was like: “This Nick is really putting us on a roller coaster. Mental status is still super important and we’re still rooting for him to wake up,’ added Amanda, who has been giving regular updates on her husband’s health.”

Whole broadway world is mourning the death of Broadway veteran and star Nick Cordero, This news has been revealed by Amanda through a hearth-wrenching and very emotional post on Instagram. Nick was battling for so long with coronavirus and finally he lost the battle on Sunday morning 6th July, 2020. Amanda posted,

God has another angel in heaven now. My darling husband passed away this morning. He was surrounded in love by his family, singing and praying as he gently left this earth.
⠀
I am in disbelief and hurting everywhere. My heart is broken as I cannot imagine our lives without him. Nick was such a bright light. He was everyone’s friend, loved to listen, help and especially talk. He was an incredible actor and musician. He loved his family and loved being a father and husband. Elvis and I will miss him in everything we do, everyday.
⠀
To Nicks extraordinary doctor, Dr. David Ng, you were my positive doctor! There are not many doctors like you. Kind, smart, compassionate, assertive and always eager to listen to my crazy ideas or call yet another doctor for me for a second opinion. You’re a diamond in the rough.
⠀
I cannot begin to thank everyone enough for the outpour of love , support and help we’ve received these last 95 days. You have no idea how much you lifted my spirits at 3pm everyday as the world sang Nicks song, Live Your Life. We sang it to him today, holding his hands. As I sang the last line to him, “they’ll give you hell but don’t you light them kill your light not without a fight. Live your life,” I smiled because he definitely put up a fight. I will love you forever and always my sweet man.

As a leading fitness trainer of the city, she has gained lots of love and commenced several fitness programs such as AK! Rope, AK! Dance, AK! Fitness, AK! Baby Bump and AK! Body which became major source of her income. Apart from this, she even opened fitness centers in major cities of the world such as Paris, Miami, Cape Town, Boston, St, Lucia, Bali, Capri and The Bahamas. Her net worth is estimated around $1 million for sure.