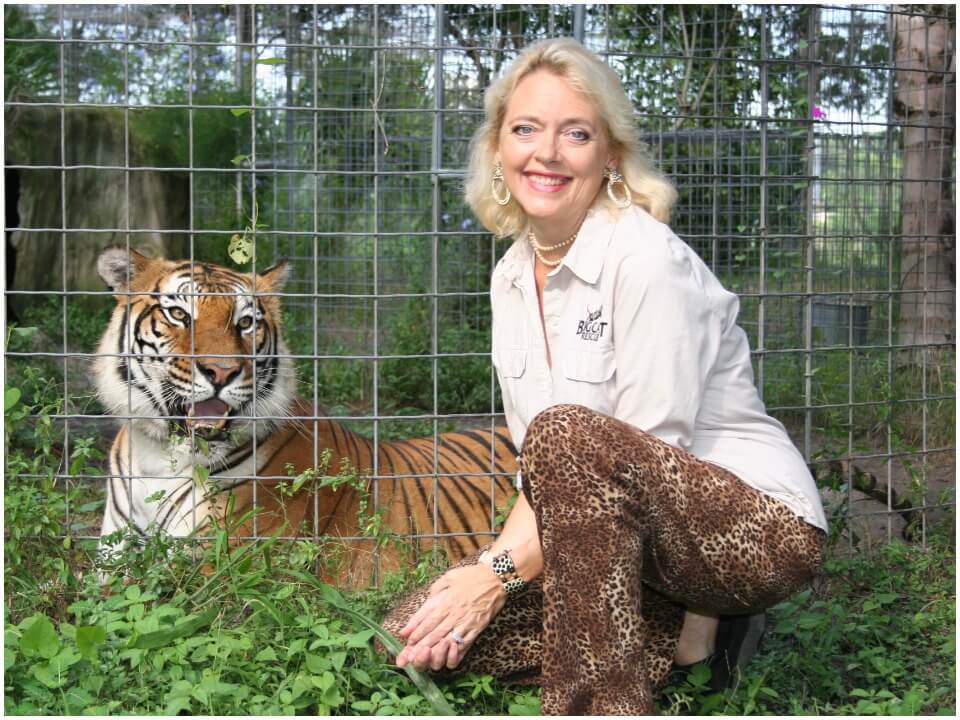 Carole Baskin is a very well renowned owner of a Big Cat Rescue sanctuary who is in the limelight because of Netflix’s “Tiger King”. Kate McKinnon will play the part of Carole Baskin and she’s already been signed for this as well. She is quite popular in the United States of America and clearly states that she loves tigers a lot also, remained the center of attraction due to her clashes with zoo owner Joe Exotic. The fights they had were seen verbally a lot of times till the year 2019 and later on after that Joe was convicted with the sentencing of prison for 22 years.

It was stated that Joe hired a hitman to kill Carole Baskin. However, the hitman he hired turned to be an agent of the federal Bureau of Investigation. In the year 2020, a series that throws light on the things that took place between Joe Exotic and Carole Baskin was launched showing a documentary kind of thing for everyone to know. It was called as Tiger King: Murder, Mayhem, and Madness.

Carole Baskin is an infamous lady entrepreneur and she as of this year 2020 is 59 years old. Initially she belonged to a very poor family and also, she was the only child of her parents. Around her childhood, she asked her parents that she did not want to attend school due to financial suffering however, her parents never deprived her of that. They asked her to pursue whatever she wants. Despite all that she ran away from her own house all alone to live alone only when she was of the age of 15 years old. She wanted to make it on her own and did not want to become a burden on her family as well so she ran away alone. Soon she started doing a job and later on also rented an apartment also for living all alone.

About her relationship and love life, she was cited with a man who was a millionaire and that too self-made from scratch. He was also an animal lover and his name were Jack Donald Lewis. Jack divorced his first wife so that he could marry Carole Baskin. They had a gap of almost 22 years in their age. Carole was 20 years old and at the time Jack was 42 years old. However, they still got married in the year 1991 in the city of Florida in Tampa in the United States of America. Later on, news came that Jack Donald is lost.

Police tried to find him a lot after Carole Baskin filed a complaint about the same for her husband. When the policewere not able to find him, then he was declared to be dead. On the other hand. It was also rumoured that it was Carole who killed her husband Jack. In fact, her rival, Joe Exotic also made a song in a video showcasing about the same as of how a woman killed her husband during the video song. All of this was done to tease and target Baskin. He did so because he thought that Baskin did all this to get all the assets of her husband which actually happened later. Also, when the police inspected further, they also found skulls of 2 tigers as well which confirmed the accusation on Joe.

She owns Big Cat Rescue sanctuary and also known as an entrepreneur in the country. The net worth of her is estimated to be $7-20 million however Big Cat Rescue is currently closed due to pandemic coronavirus.

All of the country knows about how the two, Baskin and Joe have been rivals with one another. All these things started when Carole started asking questions about how Joe was doing illegal activities in the zoo which involved animals and killing of them as well. She blamed on Joe that he was involved in killing of tigers and also selling of lion cubs and tiger cubs which were cross bred among the two species. Both of them filed cases against each other. But Joe took it to another level and also hired an assassin to kill her and paid him $3000 for the same. The hitman later on turned out to be an FBI agent and arrested Joe for the same.