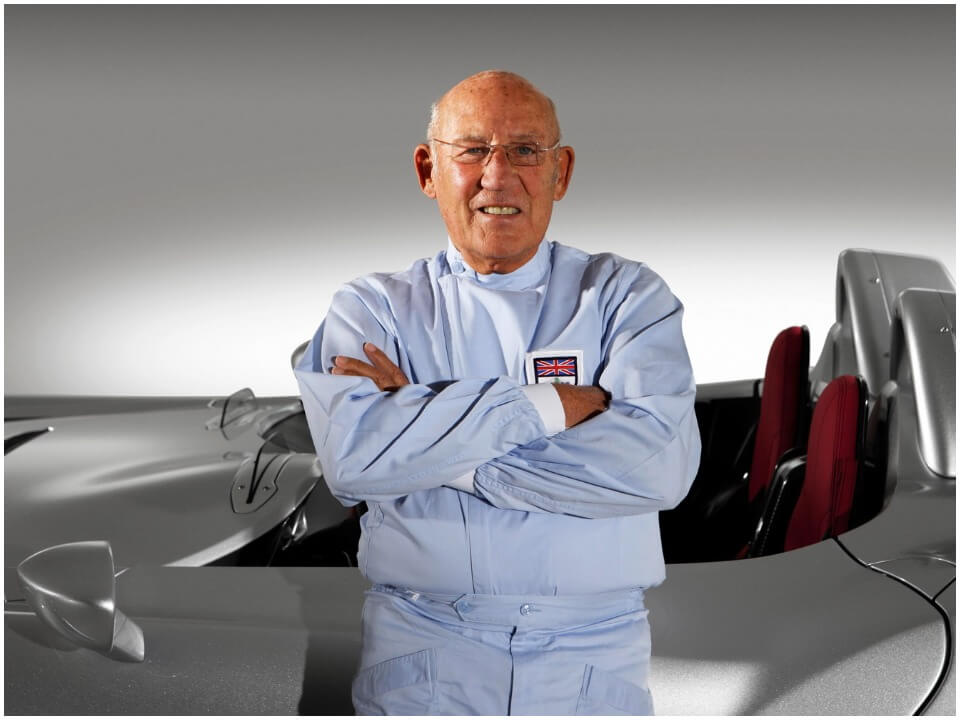 British F1 legend and probably one of the best drivers of all time from England, Sir Stirling Moss died at the age of 90 on 12th April, 2020. He was born 17th September, 1929 in West Kensington, London and his whole family was overwhelmed by a passion for cars and racing. His father Alfred Moss, finished 14th at the Indianapolis 500 Miglia in 1924 while his younger sister, Pat Moss participated in several rally races and then married the driver Erik Carlsson. Stirling was one of the first customers of the Cooper Car Company when he convinced his father to give him one of the new Cooper 500 cars.

He quickly demonstrated his ability with numerous victories nationally and internationally and continued to compete in Formula 3, behind the wheel of Cooper and Kieft car. He made his debut in the Formula 1 world championship in the 1951, placed on 14th grid at Swiss Grand and finished the race in 8th position falling short two laps behind the winner Juan Manuel Fangio. The following year Moss did not participate in any F1 race but finished second in the Monte Carlo Rally driving a Sunbeam-Talbot 90 with co-driver John Cooper. He competed in the golden era of Formula 1 where he faced drivers like Juan Manuel Fangio and Mike Hawthorn.

The British driver is considered by many to be the best driver not to win Formula 1. He was runner-up world champion four times in a row, from 1955 to 1958. He won 194 of his 497 races between 1948 and 1962, including 16 Formula 1 grand prizes throughout his 14 years brief career. One of his most famous races was the Mille Miglia – a 1500 km enduro in 1955 in Italy. He won with a record time of 10 hours and 8 minutes, ahead of Juan Manuel Fangio, who finished at the second position.

In 1962 Moss was injured in an accident at Goodwood while driving a Lotus. Due to brutal accident, he went into coma for 30 days and partially paralyzed his left side of the body for six months. He recovered and made a premature attempt to return, but he did not adapt and decided to retire. However after retiring professionally, he continued to race on several occasions and he often spotted in the stadium most of the time.

Sir Stirling Moss died on 12th April, 2020 while he was at home in Central London and cause of his death was due to complications from chest infection. He went to Singapore before Christmas in 2016 and caught up with chest infection due to which he spent 134 days in hospital as well. Ever since then he was struggling from long illness every now and thus, he disappeared from public appearances since January 2018. He is survived by his third wife Susie and his children in the family. Susie Moss, his third wife confirmed his death and said,

“He died as he lived, looking wonderful. He simply tired in the end and he just closed his beautiful eyes and that was that. It was one lap too many.”

This tragic news literally saddened the whole Formula one world and so many legends in the business paid their tributes to Sir Moss. Current “Williams” driver Geroge Russell shared a post on Tweeter and said,

“RIP Sir Stirling Moss. Only had the pleasure of meeting him briefly a couple of times but even that was enough to understand why he was so highly respected. My thoughts are with his family.”

“Today, the sporting world lost not only a true icon and a legend, but a gentleman. The Team and the Mercedes Motorsport family have lost a dear friend. Sir Stirling, we’ll miss you.”

One of the fastest drivers on any track and the “King without Crown”, Sir Moss survived the most competitive era of Formula 1. His net worth is estimated at £16 million which includes all his wealth, properties, investments and businesses. He told in an interview that he bought a land for his house at £ 5,500 which is now worth more than £10 million. Apart from this, he invested in several properties and cars and later he authored several books as well.